By default, most iPhones and iPads ship with Apple’s tiny 5-watt power adapters. They work, but not quickly. However, the iPhone 8 and later, all models of the iPad Pro, and the most recent iPad Air and iPad mini models support fast charging when connected to higher wattage power adapters. You may have an older one of these around, or you can buy a new one. Apple has bundled with iOS devices or sold 10-watt, 12-watt ($19), and 18-watt ($29, USB-C) power adapters, and the company has also produced 29-watt, 30-watt ($49), 61-watt ($69), and 87 or 96-watt ($79) USB-C power adapters for Mac laptops. Plug your compatible iPhone or iPad into one of these chargers with an appropriate cable (for a USB-C charger, you’ll need a USB-C to Lightning Cable, $19), and it will charge significantly more quickly. Look for a wattage rating on the adapter itself, or multiply the output volts and amps together to get watts.

Are you a fan of Apple’s AirPods, or have you had trouble with them staying in your ears? Either way, you might like the just-released AirPods Pro, which offer a new design with three sizes of soft, flexible, silicone ear tips and welcome new capabilities. The ear tips should make the AirPods Pro fit better for more people, and an Ear Tip Fit Test will tell you which size is right for your ears. The hot new feature is Active Noise Cancellation mode, which significantly cuts down on the background din of planes, trains, and automobiles. Alternatively, Transparency mode reduces surrounding noise while still letting you hear important announcements and stay aware of the environment around you. And, of course, Apple promises superior sound quality. The AirPods Pro cost $249 and come with a Wireless Charging Case. 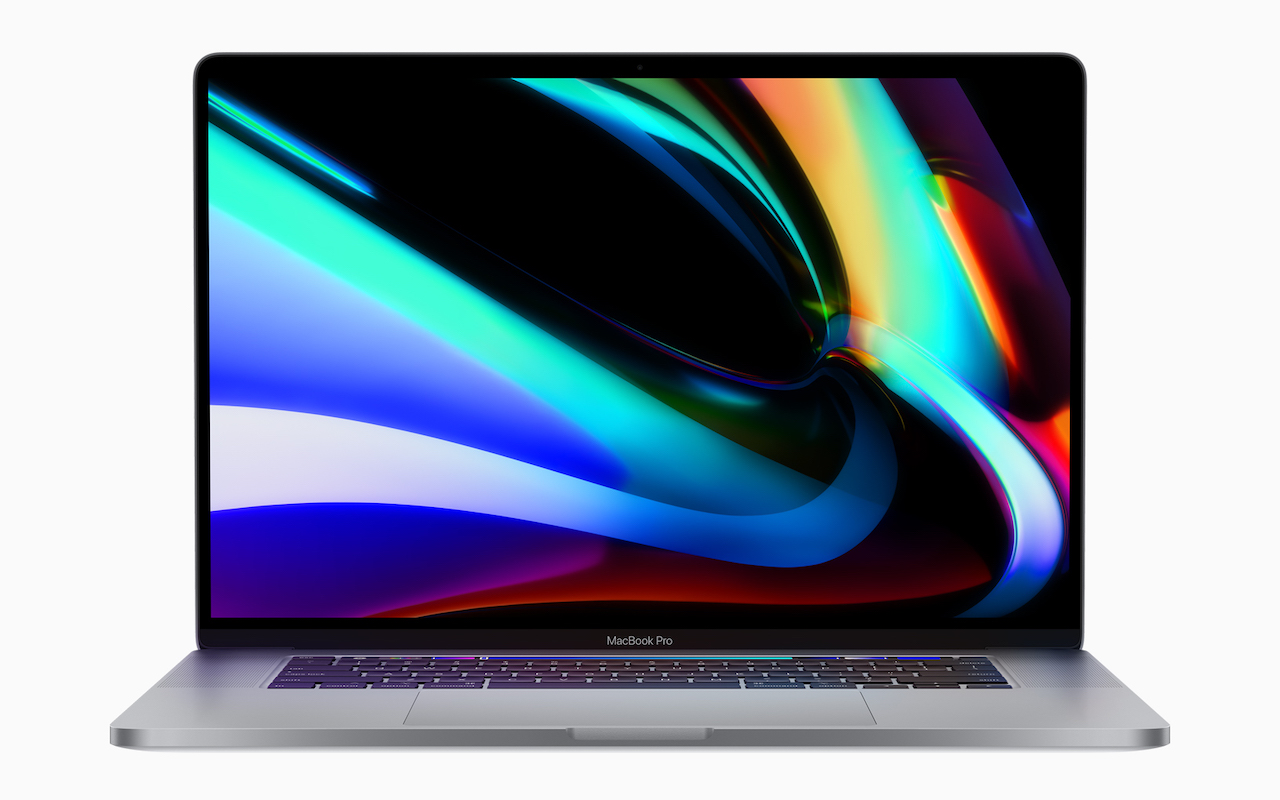 Apple also announced that the new Mac Pro (starting at $5999) and Apple Pro Display XDR (starting at $4999) will ship in December 2019—we’ll have more details once those are available.

Although the new 16-inch MacBook Pro still features a Touch Bar with a Touch ID sensor in place of the classic F-keys, another important keyboard enhancement is the return of the physical Escape key and the reinstatement of the traditional inverted-T layout for the arrow keys. 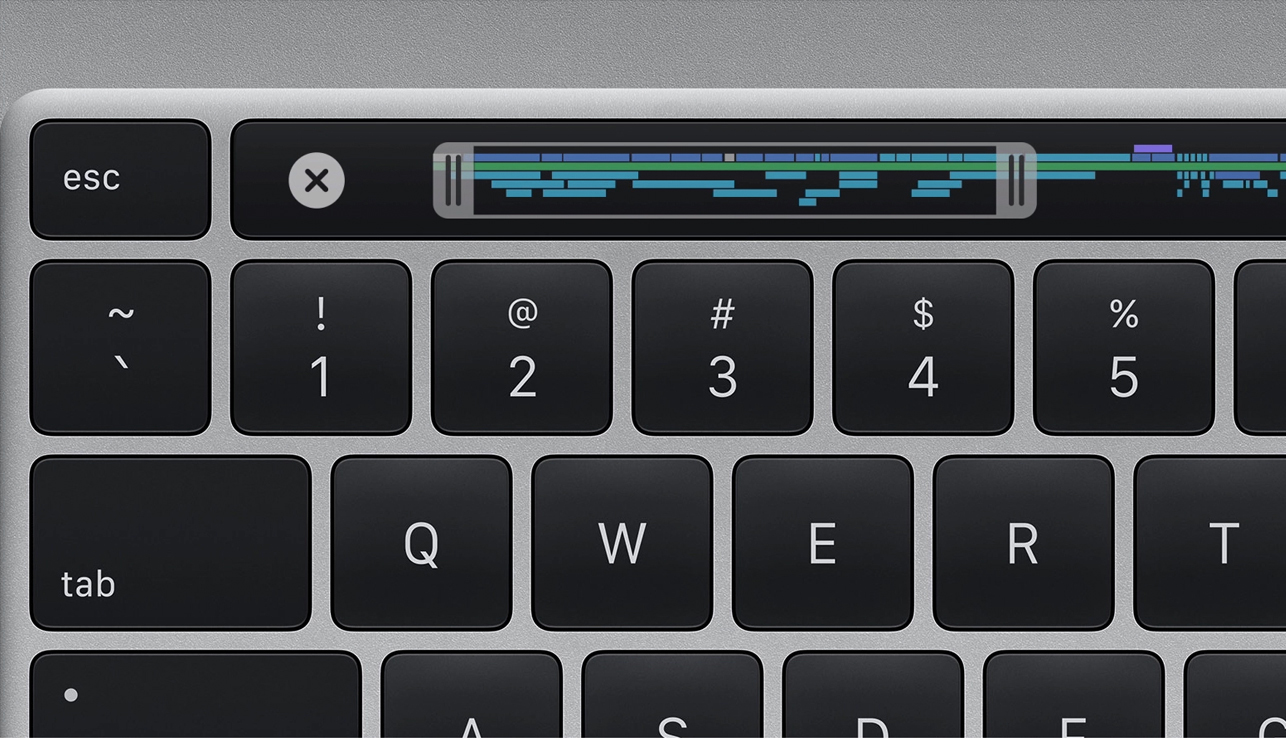 Initial reviews from pundits who received early access to the new MacBook Pro were positive, with several vocal critics of the previous keyboard saying the new one feels the way a keyboard should.

About That 16-inch Display… and Other Displays

You might expect the 16-inch MacBook Pro’s display to be its most notable feature, and it is legitimately bigger, with that 16-inch diagonal measurement and a slightly higher native resolution. But since nearly everyone uses Retina displays at scaled resolutions like 1920-by-1200 or 1680-by-1050, the practical upshot is that the new MacBook Pro won’t show any more content on the screen than the previous model, but what it does display will be a little bit larger. And it’s still gorgeous. 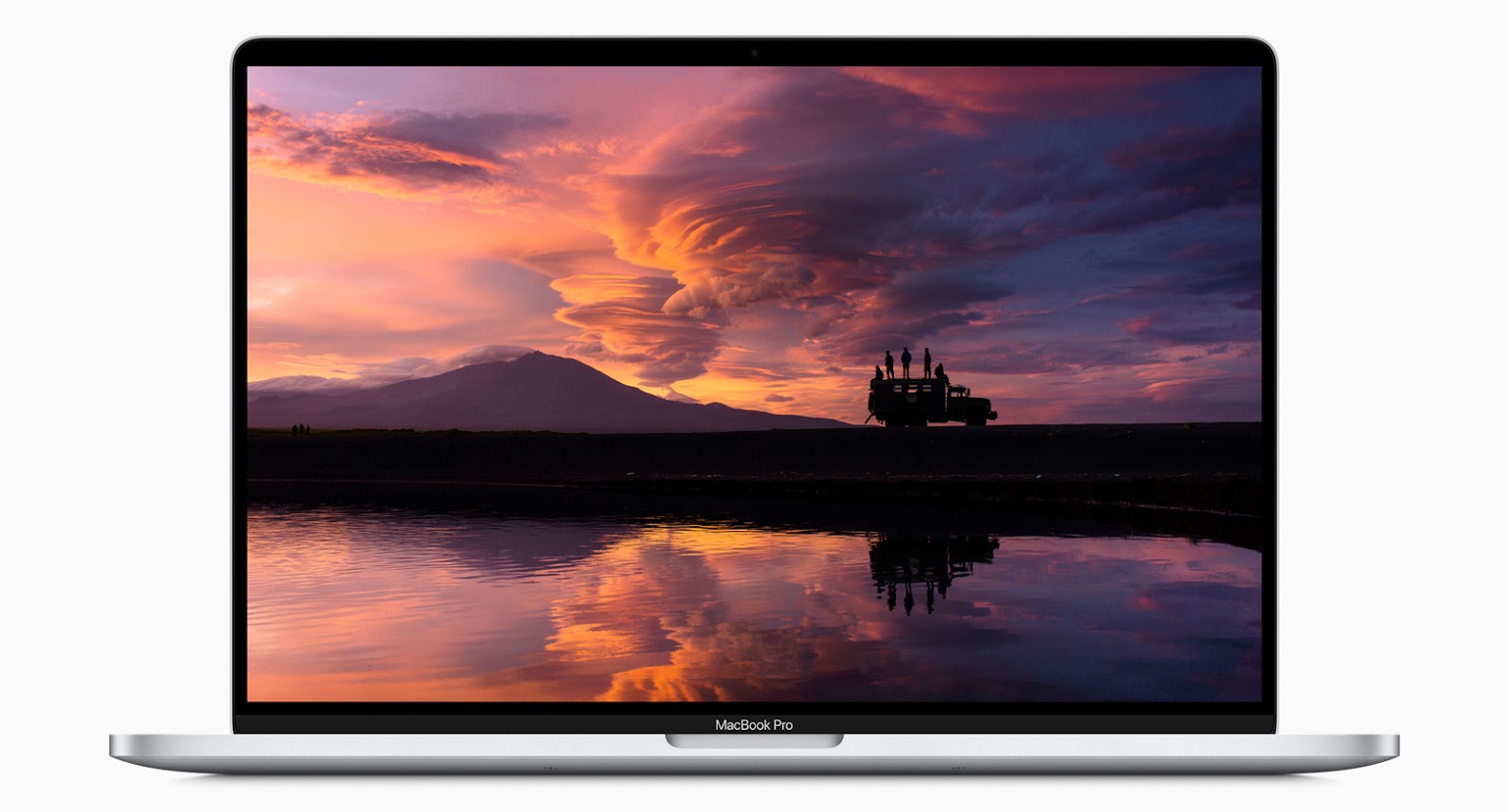 To drive that larger screen, the 16-inch MacBook Pro continues to offer both integrated (for better battery life) and discrete (for faster performance) graphics. On the latter side, you can choose from the AMD Radeon Pro 5300M with 4 GB of memory, or the Radeon Pro 5500M with either 4 GB or 8 GB of memory. Those graphics chips simultaneously support up to four 4K external displays or up to two 6K displays.

Apple clearly had audio professionals in mind while designing the 16-inch MacBook Pro. Along with the beefy processors, high RAM ceilings, and massive storage options, all of which will be popular with the audio crowd, the new notebook features significantly improved audio input and speakers.

For input, the MacBook Pro relies on a three-mic array with high signal-to-noise ratio and directional beamforming that Apple claims delivers a 40% reduction in hiss. Podcasters have praised the new mic array, though without suggesting that it competes with dedicated mics.

Equally compelling for anyone who listens to music is the new six-speaker, high-fidelity sound system. Its force-canceling woofers with dual opposed speaker drivers reduce unwanted and sound-distorting vibrations and enable the bass to go half an octave deeper than the previous model. There’s still a 3.5mm headphone jack too.

Between the larger screen, the six-speaker sound system, and the 100-watt-hour battery that Apple says provides up to 11 hours of battery life, the company had to increase the size of the 16-inch MacBook Pro slightly compared to the previous 15-inch model.

802.11ac Wi-Fi and Bluetooth 5.0 remain standard for wireless connectivity, and the 16-inch MacBook Pro continues to offer four Thunderbolt 3.0 ports for charging and connectivity. You’ll still need a collection of dongles for connecting to USB-A peripherals, HDMI and DisplayPort monitors, Ethernet networks, and so on.

Note that the 16-inch MacBook Pro ships with macOS 10.15 Catalina and almost certainly cannot be downgraded to 10.14 Mojave.

Frankly, this new MacBook Pro is a solid upgrade, particularly for those who have been delaying due to the problems with the butterfly keyboard. The only real problem is that the smaller, lighter, and less expensive 13-inch MacBook Pro and MacBook Air are still saddled with that keyboard. We hope 2020 will bring the redesigned scissor-switch keyboard to those models as well. 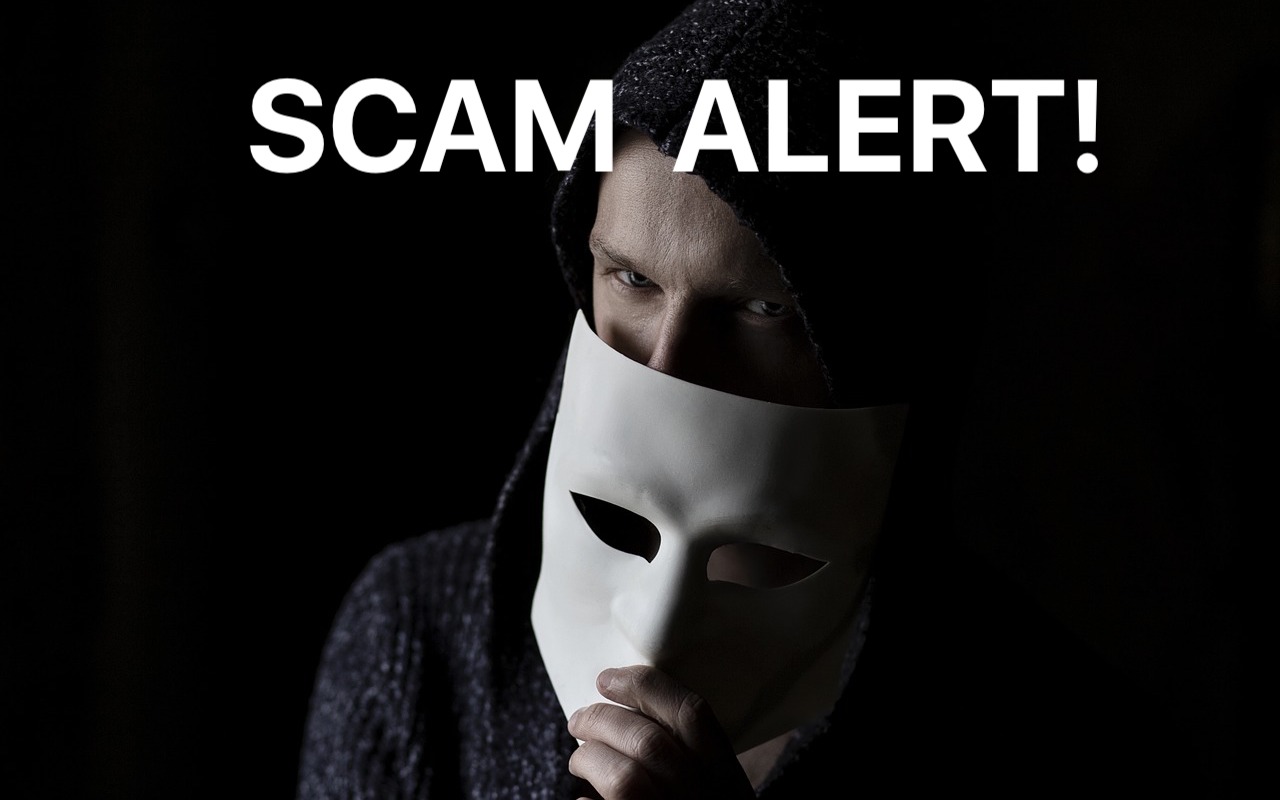 Whenever Apple releases hot new hardware, it’s tempting to order the latest and greatest and then put your old Mac or iPhone up for sale on a classifieds site like Craigslist. If you do that, be cautious about potential buyers—it’s increasingly common for a scammer to request that you ship them the device and then to “pay” you by forging payment email from PayPal or using a stolen PayPal account (whose owner will likely get PayPal to take the money back from you). Instead, insist on an in-person meeting in a public place and payment in cash or via a digital method like Apple Pay Cash or Venmo that can’t be canceled once you accept the money. Or, if the location and payment amount (under $1000) work, meet in a nearby post office and request payment via money order (US or Canada) that you can verify on the spot. Craigslist has more advice.

(Featured image modified from an original by Vitabello from Pixabay)

Let’s be honest—text editing in iOS has never been anywhere near as good as it is on the Mac. We may be more accustomed to our mice and keyboards, but the Multi-Touch interface has always been clumsy when it comes to text. Apple keeps trying to improve iOS’s text editing features, and iOS 13 (and iPadOS 13) brings some welcome changes in how we go about positioning the text insertion point, selecting text, and performing the familiar options in the Mac’s Edit menu: Cut, Copy, Paste, and Undo/Redo. Has it caught up with the Mac yet? You’ll have to decide that for yourself, once you’ve learned the new techniques.

Note that these changes apply only to spots in iOS where you’re entering and editing text, not selecting and copying static, read-only text such as a Web page in Safari. And even when you are working on a Web page where you can enter and edit text, the site may override iOS’s text handling.

iOS 13 improves positioning by letting you press and hold the insertion point to pick it up and then drag it to where you want it. This approach is much easier and more sensible than the previous method.

On the Mac, you can select text with multiple clicks, by clicking and dragging, or by using the keyboard. In iOS, however, text selection has always been tough—you could double-tap to select a word, but anything else required subsequent moving of start and end markers. (On an iPad with a keyboard, you could hold Shift and use the arrow keys too.)

For selections of an arbitrary length, just press, pause ever so briefly to start selecting, and then drag to extend the selection. In other words, it’s as close to the Mac approach as is possible with the Multi-Touch interface. If the selection isn’t quite right, you can adjust the start and end markers.

Everyone knows Command-X for Cut, Command-C for Copy, Command-V for Paste, and Command-Z for Undo on the Mac. In previous versions of iOS, those commands were available only from a popover that appeared when text was selected, or (for Paste) when you pressed and held in a text area. The only command with a gesture, so to speak, was Undo. At the risk of dropping it, you could shake your iOS device to undo your last action. Not good.

iOS 13 introduces a variety of three-finger gestures to make these commands quick and easy to invoke. Note that you can use the entire screen for these gestures—it’s OK to make them with one finger over the keyboard.

Whenever you use one of these gestures, a little feedback badge appears at the top of the screen to reinforce what you just did.

If you can’t remember which direction to pinch or swipe, press and hold with three fingers anywhere for a second to see a shortcut bar at the top of the screen with icons for Undo, Cut, Copy, Paste, and Redo.

Finally, instead of using Cut and Paste to move a swath of selected text, try dragging it to the new position.

Various third-party keyboards have provided “slide-to-type” over the years, letting you type a word by sliding your finger from letter to letter on the keyboard without lifting it up in between. But switching to a third-party keyboard meant that you often gave up useful other features, like Siri dictation, so most people stuck with Apple’s default keyboard.

On the iPhone, iOS 13 now lets you slide to type on its default keyboard, and it works surprisingly well. In iPadOS 13, slide-to-type works only on the new floating keyboard you can get by pinching with two fingers on the default keyboard (pinch out with two fingers to restore the default keyboard). When you get to the end of a word, lift your finger to insert it, and then start sliding again for the next word. If you make a mistake, the suggestions above the keyboard often provide the word you want. You can switch between tapping (best for unusual words) and sliding on a word-by-word basis.

Make a mistake with sliding? By default, tap Delete after inserting a slide-to-type word to delete the whole word, not just the final letter. If you don’t like that behavior, turn off Delete Slide-to-Type by Word in Settings > General > Keyboard.