Want to Push Some Buttons? Make the Most of Control Center in iOS

Starting back in iOS 11, Apple made Control Center significantly more useful by letting you customize it more to your liking by adding and rearranging buttons. You can even remove a few of the default buttons if they’re just taking up space.

To open Control Center in iOS 11 and later on an iPhone X or later (the models with Face ID), swipe down from the top-right corner of the screen. For iPhones with a Home button that use Touch ID (including the just-released iPhone SE and the iPod touch), swipe up from the bottom edge of the screen.

In Control Center, you can interact with the various controls in two ways: tap or press and hold. Unfortunately, the interface provides no clues to alert you to how you should interact with any given item.

Start with a tap, but it’s always worth pressing and holding to see what options Apple might have hidden behind that button. Some buttons, like Camera, Do Not Disturb, and Flashlight, even react to both a tap (launching the app or turning on) and a press-and-hold (providing extra useful options).

What happens when you tap a button varies, but here are some guidelines:

Here’s how to switch things up:

Pay attention to which buttons you find yourself actually using in Control Center and how often you use them. Then you can adjust which ones appear and where they’re located, so you can find them quickly whenever you open Control Center.

Apple has a full list of all the controls in Control Center, but here are a few of our favorite optional buttons, and what to expect from them:

Only Apple can provide new controls for Control Center right now, so you won’t find any options for working with independent apps. But who knows—as with Siri, perhaps Apple will open Control Center up to developers in the future too.

Covid 19 Exposure Notification System from Apple & Google and Your Privacy

Apple recently released iOS 13.5, incorporating a new Exposure Notification API in response to the global COVID-19 pandemic. We’ve seen a few people freaking out about this, but seriously, calm down, folks. At best, the Exposure Notification API could lower contact tracing costs, reduce the spread of COVID-19, prevent life-changing health consequences, and save lives. At worst, it won’t prove particularly effective. In neither case does it pose any threat to personal privacy.

Why have Apple and Google—two companies that normally compete tooth and nail—formed this unprecedented partnership? Contact tracing is one of the key techniques employed by public health authorities in slowing the spread of COVID-19. It involves gathering information from an infected person about those they’ve been in contact with, enabling authorities to learn who might have been the source of the infection and who they may have infected. It’s a slow, laborious, and error-prone process—do you know or even remember all the people you’ve come in contact with over the past few weeks?—but it’s helpful nonetheless.

To speed up this process and make it more accurate, Apple and Google are building exposure notification capabilities into their respective smartphone operating systems. A large percentage of the population carries a smartphone running either iOS or Android, and since these phones have the capability to detect when other phones are in their vicinity via Bluetooth, Apple and Google realized they could use technology to alert people when they had been exposed to a person who later tests positive for COVID-19.

Their solution comes in two phases. In the first phase, Apple and Google are releasing the Exposure Notification API, and that’s what just happened with iOS 13.5. This API, or application programming interface, allows apps written by public health authorities to work across both iOS and Android devices, something that’s never been possible before. The first key fact to understand is that only public health authorities will be allowed to write apps that leverage the Exposure Notification API. It cannot be incorporated into sketchy social media apps.

Unfortunately, it seems likely that many people will never learn about or download those apps. So in the second phase, Apple and Google will build the exposure notification technology directly into iOS and Android, so it can work without a public health authority app being installed.

The second key fact to understand is the entire system is opt-in. You must explicitly consent to the terms and conditions of the program before it becomes active on your phone. That’s true whether you get an app in the first phase or rely on the integration in the second phase. And, of course, if you change your mind, you can always turn it off in the app or the operating system settings.

How does it work? Apple and Google have developed an ingenious approach that ensures that those who opt-in to the technology can use it without worrying about privacy violations.

Your phone creates a Bluetooth beacon with a unique ID derived from a randomly generated diagnosis encryption key. The system generates a fresh diagnosis key every 24 hours and stores it on your phone for 14 days, deleting all older keys. Plus, the unique Bluetooth beacon ID that your phone broadcasts to other phones in your vicinity changes every 15 minutes. Similarly, your phone reads the unique IDs from nearby phones and stores them locally. This approach ensures privacy in three important ways:

What happens if you test positive for COVID-19? (Sorry!) In that case, you would need to use a public health authority app to report your test results. You’ll likely have to enter a code or other piece of information to validate the diagnosis—a requirement necessary to prevent fake reporting.

When the app confirms your diagnosis, it triggers your phone to upload up to the last 14 days of diagnosis encryption keys—remember, these are just the keys from which the IDs are derived, not the IDs themselves—to the servers. Fewer days might be uploaded depending on when the exposure could have occurred. 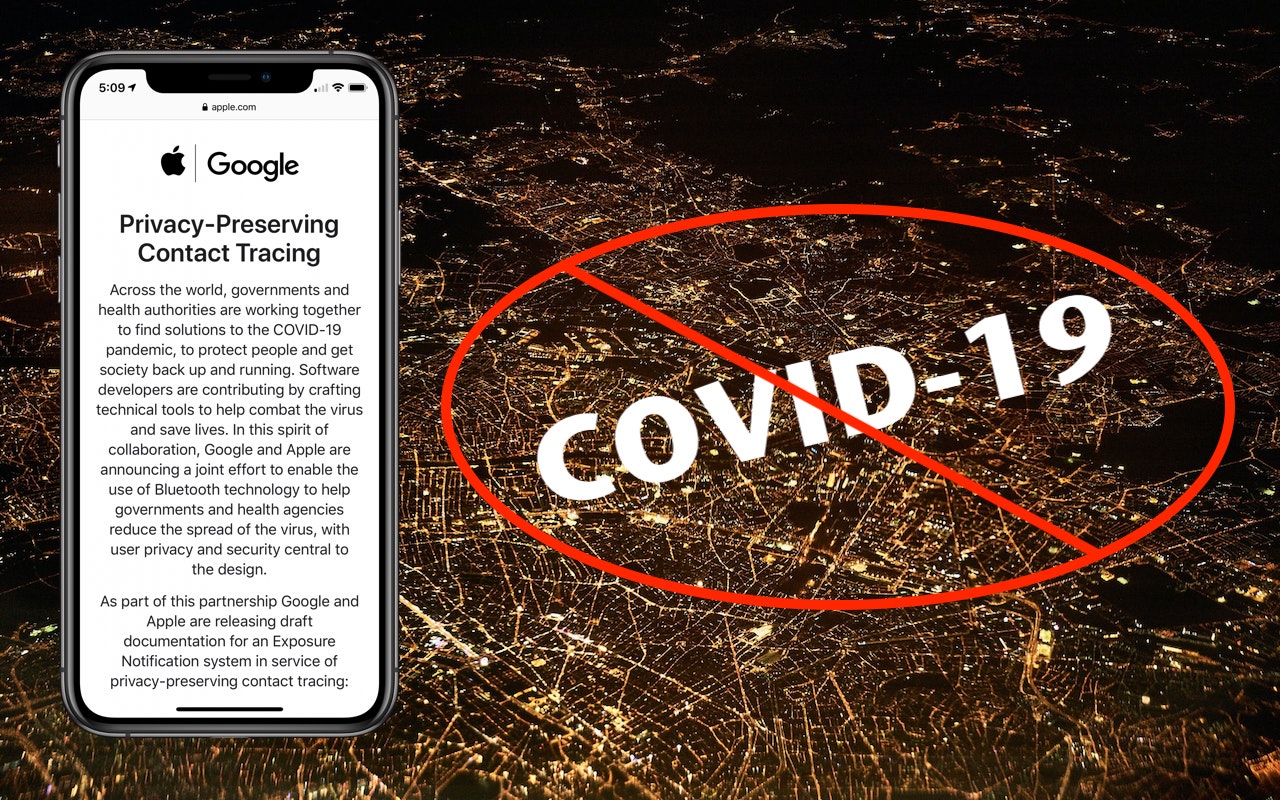 All the phones enrolled in the system constantly download these diagnosis keys from devices of infected people. Then they perform cryptographic operations to see if those keys match any of the locally stored Bluetooth IDs captured during the period covered by the key. If there’s a match, that means you were in proximity to an infected person, and the system generates a notification with information about the day the exposure happened, how long it lasted, and the Bluetooth signal strength (which can indicate how close you were). A public health authority app will provide detailed instructions on how to proceed; if someone doesn’t have the app yet, the smartphone operating system will explain how to get it. Additional privacy protections are built into these steps:

Finally, Apple and Google have said they’ll disable the exposure notification system on a regional basis when it is no longer needed.

We apologize if that sounds complicated. It is, and necessarily so, because Apple and Google have put a tremendous amount of thought and technical and cryptographic experience into developing this exposure notification system. They are the preeminent technology companies on the planet, and their knowledge, skills, and expertise are as good as it gets. A simpler system—and, unfortunately, we’ll probably see plenty of other apps that won’t be as well designed—would likely have loopholes or could be exploited in unanticipated ways.

You can read more about the system from Apple and Google, including a FAQ and the technical specifications.

Our take? We’ll be installing the necessary app and participating in this exposure notification system. It’s the least we can do to help keep our loved ones and others in our communities safe. In a pandemic, we all have to work to help others.

(Featured image based on an original by Dennis Kummer on Unsplash)

Since iOS 12 and macOS 10.14 Mojave, Apple has supported Group FaceTime, which lets you have a video call with up to 32 people. However, as has become painfully obvious in today’s era of non-stop videoconferencing, Group FaceTime has a feature that some find obnoxious: automatic speaking prominence that causes the video tile for the speaker to grow and move around. Happily, Apple finally took the feedback and added options to disable that feature in iOS 13.5, iPadOS 13.5, and macOS 10.15.5 Catalina. In iOS and iPadOS, disable the Speaking option under Automatic Prominence in Settings > FaceTime; on the Mac, look in FaceTime > Preferences.