4 New Apple OS Features You Can Use Today 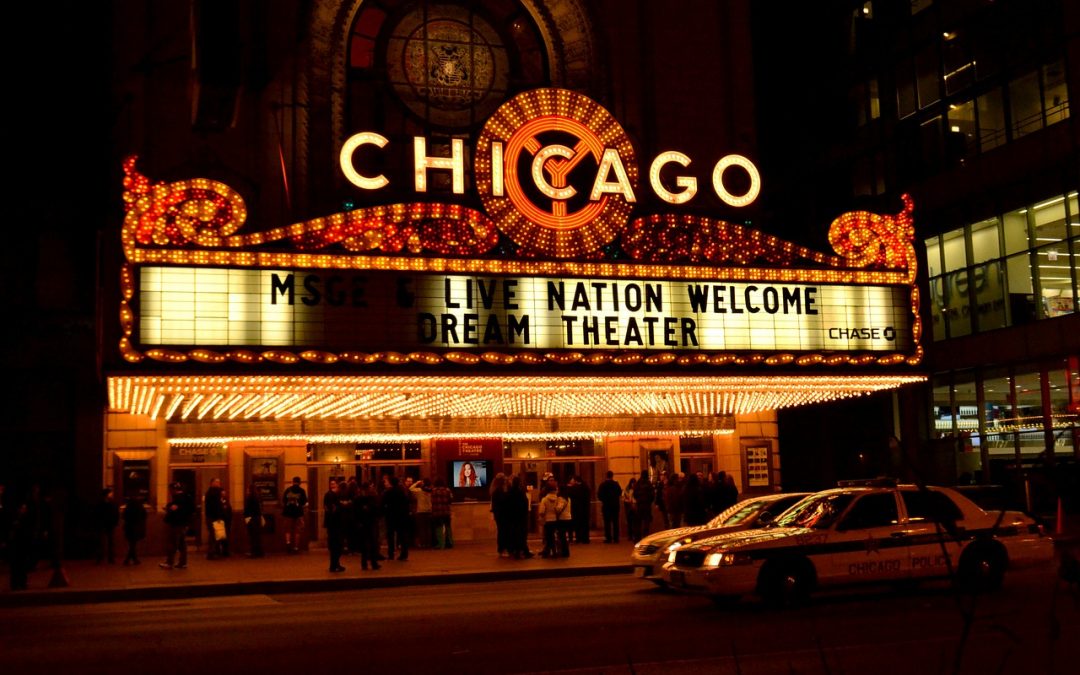 Apple just released new versions of all its operating systems—iOS, macOS, watchOS, and tvOS—fixing bugs, plugging security holes, and, best of all, adding a few new features. Here are four things you can do once you’ve updated. (If you’re concerned that installing the updates may cause other problems, check with us first, but it’s best to stay current.)

1: Sleep better after using your Mac late at night.

macOS 10.12.4 Sierra has gained Night Shift, a feature from iOS that automatically shifts the colors of the screen to the warmer end of the spectrum after dark. Night Shift may help you sleep better by reducing the amount of blue light that tricks your body into thinking it’s earlier than it is.

To set up Night Shift, open System Preferences > Displays > Night Shift and choose Sunset to Sunrise from the Schedule pop-up menu. Night Shift knows when the sun rises and sets wherever you are, but if you prefer, you can also set custom on and off times. (If you don’t see the Night Shift button in the Displays preference pane after upgrading to 10.12.4, your Mac is unfortunately too old to support Night Shift.) 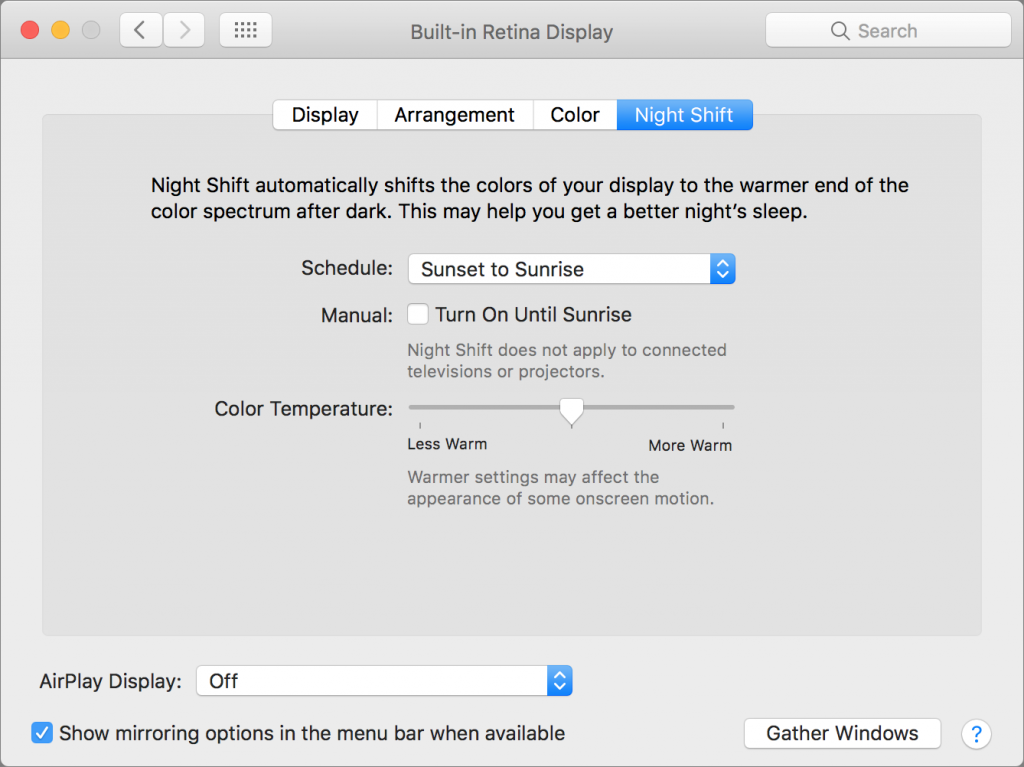 If you’re working with graphics at night, or if video looks odd, you can turn off Night Shift manually. Do that either in the Displays preference pane or by scrolling down in Notification Center (click it in the upper-right corner of the screen) to see the Night Shift switch.

2: Find the AirPod that fell between the couch cushions.

Apple’s wireless AirPods earbuds are cute, but they’re also easy to misplace. If you can’t find yours, iOS 10.3’s Find My iPhone app can help. Bring it up, tap the AirPods icon in the display, and then tap the Play Sound button to make them play a locator sound. If you’ve lost only one AirPod, you can mute the other so it’s easier to hear where the sound is coming from. 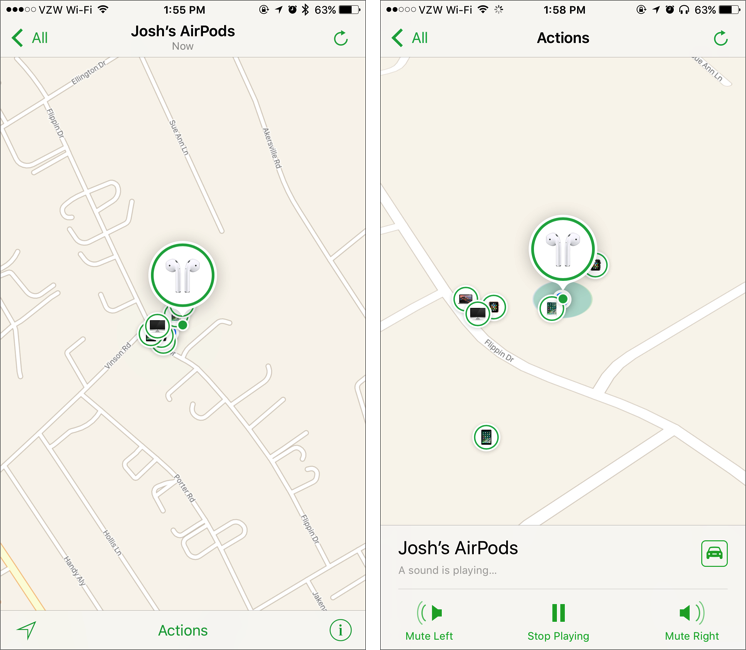 Note that Find My AirPods works only when in range of a paired iOS device, so it may not help if you lose an AirPod while running.

3: Don’t be “that person with the Apple Watch” at the theater.

You’re in a darkened theater, at a movie or a play, and when you move in your seat or cover your mouth to cough, your Apple Watch’s screen turns on, annoying the people around you. Even worse is when a notification rolls in, causing the watch to make a sound. Embarrassing, we know. Happily, watchOS 3.2 adds Theater Mode, which turns on Silent mode and keeps the screen dark by disabling its standard “raise to wake” behavior.

To enable Theater mode, open Control Center by swiping up from the bottom of the screen. Then tap the Theater Mode button, which is emblazoned with theater masks. After the performance, you’ll need to disable Theater mode manually by tapping its button again. 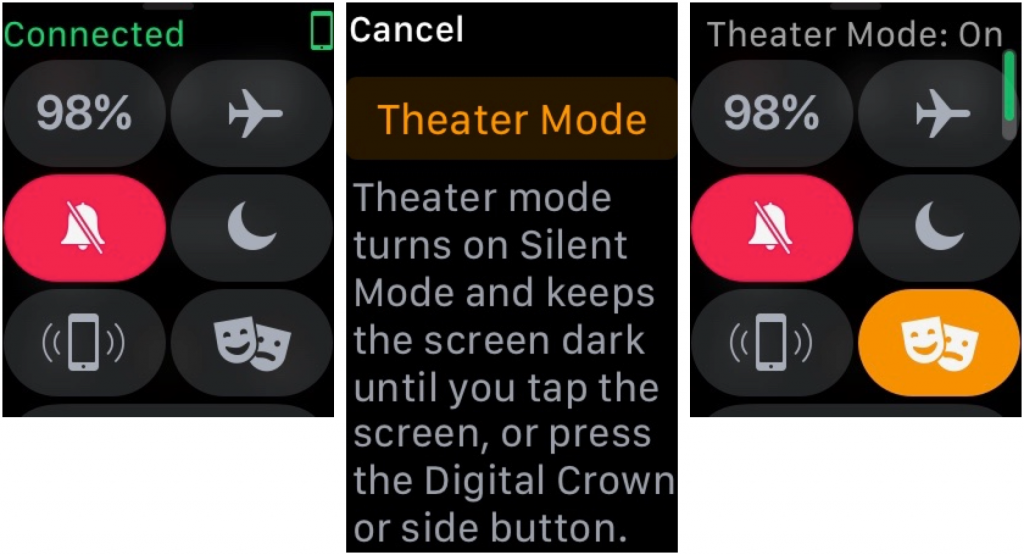 If you do need to check the time surreptitiously (who knew this performance would go so long!), tap your Apple Watch’s screen, or press the Digital Crown or side button.

4: Ask Siri to find your car in a humongous parking lot

We’ve all been there. You parked at the mall, but got turned around while you were inside, and now you can’t find your car in the sea of automobiles. In iOS 10.3, you can now search for “parked car” in Maps, or just ask Siri, “Where did I park?” 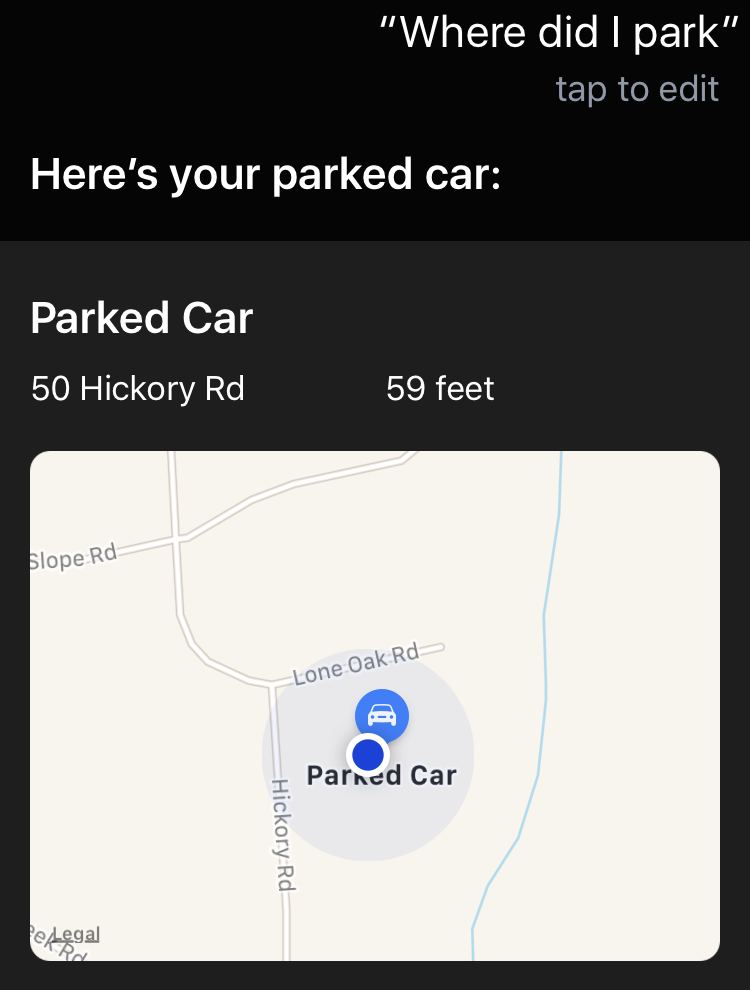 And if you ever lose your car at a place like Disney World, this feature alone will be worth the price of the iPhone!

As we anticipated, Apple used its September 7th media event (which you can watch) to announce the new iPhone 7 and iPhone 7 Plus, along with the new Apple Watch Series 2 and a pair of wireless earbuds called AirPods. Apple also announced that iOS 10 and watchOS 3 are due to ship on September 13th. Although Apple didn’t mention the iPad or Mac during the event, the company later modified its iPad lineup with new configurations and pricing and said that macOS Sierra would ship on September 20th. Let’s look at the key details of Apple’s announcements and explore what they might mean to you — there’s a lot to get through!

iPhone 7 and iPhone 7 Plus

It’s what we were all waiting for. Apple announced the new iPhone 7 and iPhone 7 Plus, which are the same sizes as the iPhone 6s and 6s Plus, respectively. The company stuck with the silver, gold, and rose gold case colors, but dropped space gray in favor of two black finishes: a matte black and a polished jet black.

As rumored, the new models drop the 3.5mm analog headphone jack entirely, but they come with a pair of Lightning-based EarPods for listening to music and making phone calls, plus a free Lightning-to-headphone adapter so you can continue to use older audio equipment. You can also buy additional adapters for $9.

The new iPhones have notably improved cameras. Along with a 7-megapixel front-facing camera that offers body and face detection plus image stabilization, the main rear-facing camera provides a 12-megapixel sensor with an ƒ/1.8 aperture lens that Apple claims is 60 percent faster and 30 percent more energy efficient than the camera in the iPhone 6s. The flash features four LEDs for 50% more light, plus a flicker sensor to help correct for artificial lighting. Even better, optical image stabilization is now standard on both models, and both can capture raw images with wide-gamut color.

For photography buffs, the iPhone 7 Plus is particularly interesting, because it features another rear-facing camera, which provides a telephoto lens with an ƒ/2.8 aperture. Apple’s Camera app seamlessly combines the two cameras to provide 2x optical zoom (up to 10x digital zoom) and will have a Portrait mode that focuses on people in the foreground while blurring the background. (Portrait mode is due to ship in an update to iOS later this year.)

The Home button takes a page from the Force Touch trackpad; it’s no longer a physical button but instead uses Apple’s Taptic Engine to make it feel as though you’re pushing a button. Apple says it should be more responsive and more reliable.

Losing the headphone jack and making the Home button force-sensitive helped Apple in another way: the iPhone 7 models are now dust and water resistant. Don’t toss your iPhone 7 in the pool, since they’re rated for immersion in only up to 1 meter of water, but it should withstand an errant splash or fall into the waves at the beach.

The iPhone 7 models are powered by Apple’s quad-core A10 Fusion processor, which automatically switches between two cores dedicated to high performance and two that are optimized for power efficiency to prolong battery life. Their screens are improved too, with Apple promising 25% more brightness with a wider color display.

From the outside, little has changed, although Apple did discontinue the mega-expensive gold Apple Watch Edition (which topped out at $17,000) in favor of the new ceramic Apple Watch Edition Series 2, which starts at $1249. Apple extended its lifestyle partnerships, updating the Apple Watch Hermès edition and introducing an Apple Watch Nike+, both of which differ from the stock models only in bands and custom watch faces.

The most significant addition is the GPS chip, which enables runners to track their routes and get performance information without carrying a bulky iPhone. When you complete a workout, the Activity app shows a map of your route along with speed data. Third-party apps like Strava and Runkeeper should also be able to take advantage of the GPS chip. Apple also doubled the brightness of the screen to make it easier to see in direct sunlight.

Swimmers, rejoice! Apple made the new watch water resistant to a depth of 50 meters and beefed up the Workout app with Pool and Open Water workout options that count laps and track average lap pace. You still can’t take it scuba diving or waterskiing, but for most standard aquatic activities, you shouldn’t have to worry about water damage.

Finally, those who found the original Apple Watch sluggish will appreciate Apple’s second-generation S2 System in a Package (SiP) chip, which Apple claims is 50% faster and includes a graphics processing unit that can double performance. Of course, the new models come with watchOS 3, which also provides significant speed boosts.

The Apple Watch Series 2 starts at $369 for the 38 mm model. Prices increase with the 42 mm model and with certain bands. You can preorder on September 9th, with availability on September 16th, although the Nike+ version won’t ship until October and the Hermès version ships on September 23rd.

If the Apple Watch still feels a little pricey, you can buy an Apple Watch Series 1 starting at $269—it’s an upgraded original model with the new S2 processor but not the GPS chip, water resistance, or brighter screen.

Although Apple did the right thing and included a Lightning-to-headphone adapter with every iPhone 7, the company also said, “the future is wireless.” To bolster that claim, Apple announced the AirPods, a pair of wireless headphones that eliminate the iconic white wires while still providing high-quality audio output and input.

The AirPods pair simultaneously to your iPhone and Apple Watch with a simple one-tap setup, and you can switch them to work with your iPad or Mac easily. (They act as normal Bluetooth earbuds when used with non-Apple devices—it remains to be seen how well that works.) Thanks to optical sensors and an accelerometer, the AirPods can detect when they are in your ears, turning on and off automatically to save power. Apple claims you can get 5 hours of listening time on one charge; you recharge them in a special case that holds multiple additional charges for 24 hours of life before it too needs recharging via a Lightning cable.

The AirPods include beamforming microphones that can focus on where your voice is coming from and filter out background noise, which should improve phone calls and recognition with Siri. Speaking of which, just double-tap one of the AirPods to invoke Siri to issue commands to whatever device the AirPods are paired with.

Apple says the AirPods will be available in late October for $159.

Twitter: Apple has announced the new iPhone 7, Apple Watch Series 2, and wireless AirPods—head over to our blog for details!

Facebook: At its special event on September 7th, Apple unveiled the new iPhone 7 and iPhone 7 Plus, along with the GPS-enabled Apple Watch Series 2 and the wireless AirPods for wire-free audio. We have the key details over at our blog, including pricing and when all these goodies will become available.