Some of Our Favorite Features of iOS 13 and iPadOS 13 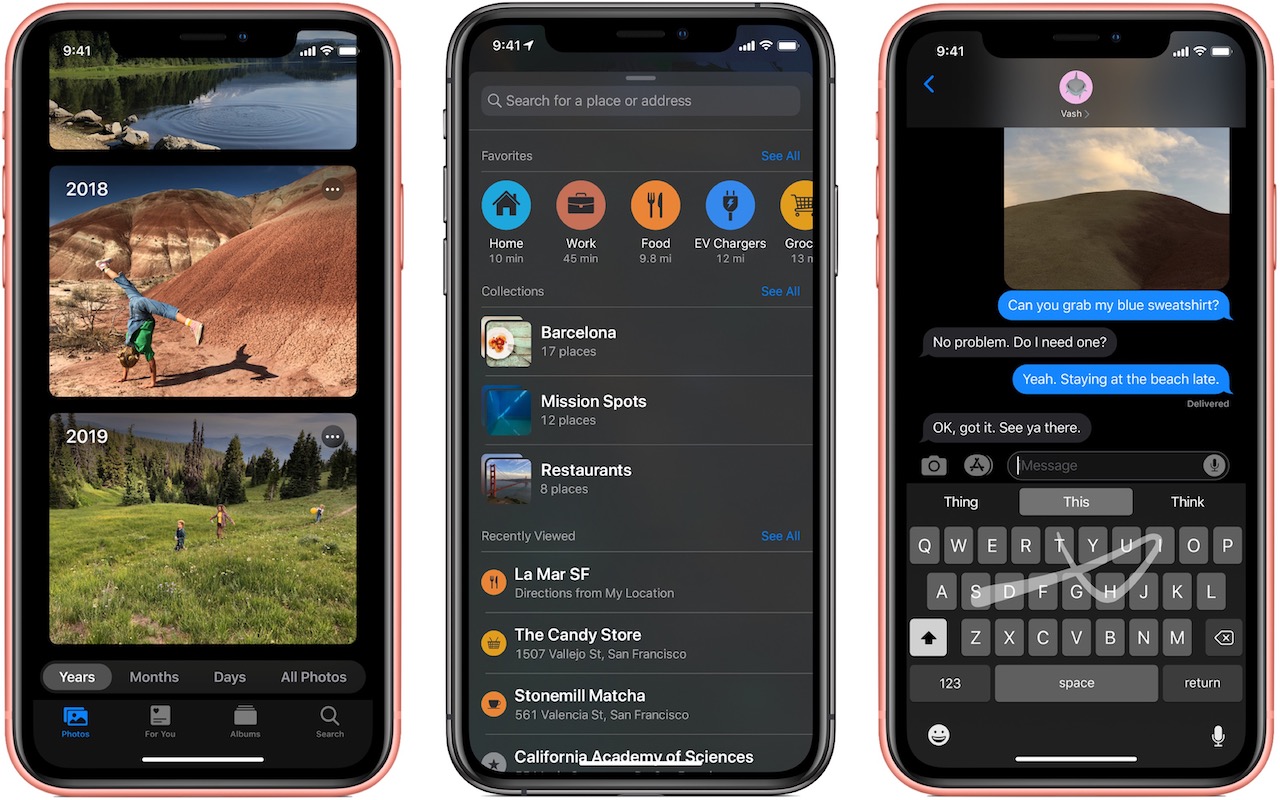 Some of Our Favorite Features of iOS 13 and iPadOS 13

It’s hard to sum up iOS 13’s benefits succinctly because Apple has made so many improvements (we’ll get to what’s cool about iPadOS 13 later in the article). That means there’s something for just about everyone. Here are some of the changes we think you’ll most appreciate.

An area in iOS that has long begged for improvement is text handling. Although the familiar approaches still work, you can finally select text by merely tapping and swiping. Double-taps select recognized bits of text like phone numbers and addresses, and triple and quadruple taps select sentences and paragraphs. You can even move the cursor by dragging it into position.

Apple enhanced iOS 13’s QuickType keyboard with a feature long offered by independent keyboards: swipe to type. Called QuickPath, the feature lets you swipe your finger from one letter to the next without picking it up. You can switch between swiping and tapping whenever you want. It works only on the iPhone and the iPad’s new floating keyboard.

Apple has implemented its new Voice Control system in iOS 13 as well as macOS 10.15 Catalina, and it’s impressive in both. Once you turn it on in Settings > Accessibility > Voice Control, you can use voice commands to switch apps, tap visible controls, and more. Plus, it lets you dictate text without invoking Siri. 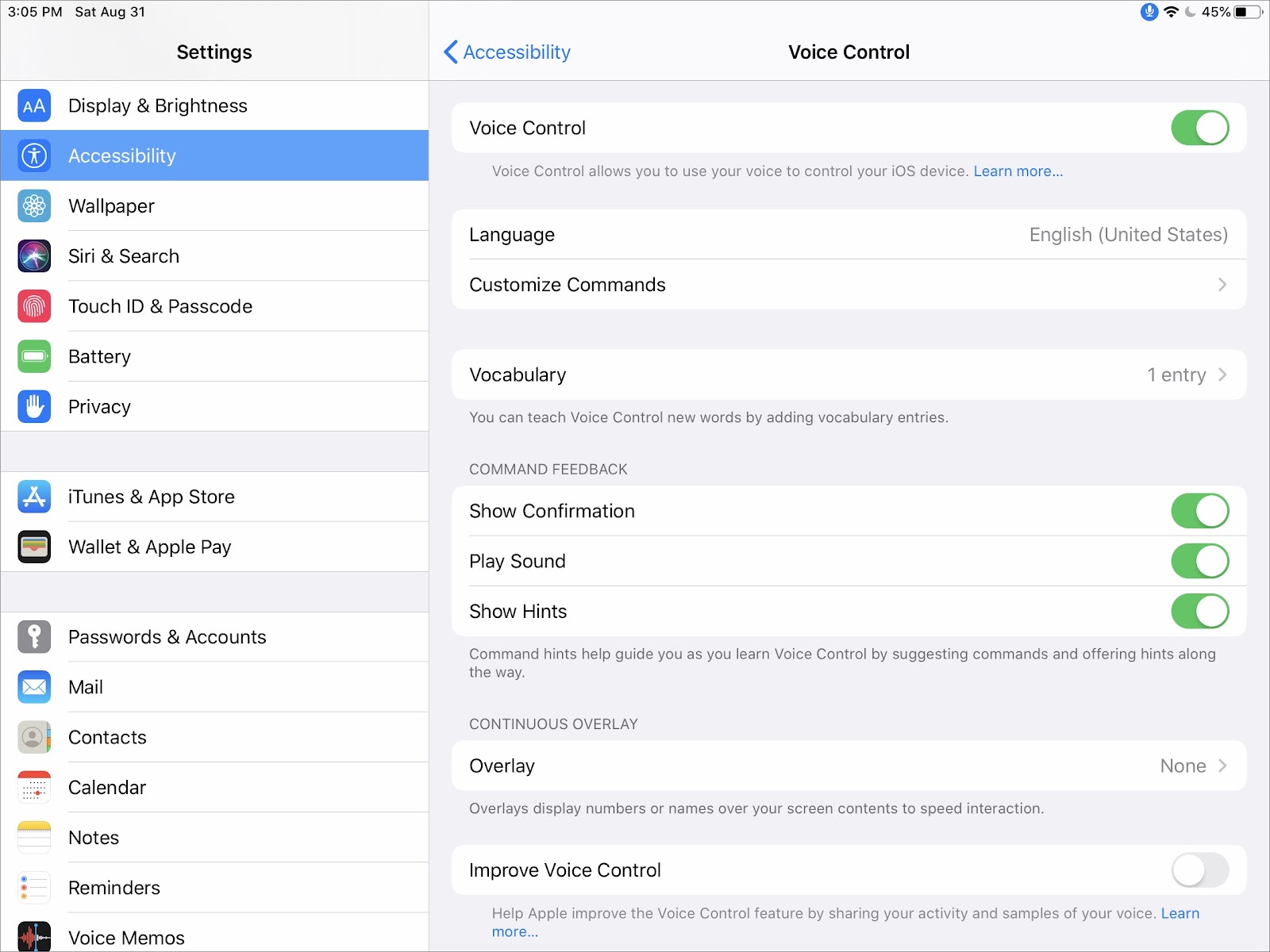 The dictation now lets you delete text, replace text, and capitalize words, making it possible to edit what you’ve written without touching the keyboard. Voice Control may sound like it’s aimed at people who have trouble physically using iOS’s Multi-Touch interface, but it could be useful to anyone.

Those who use an iPad for serious work will love the updated Files app, which brings much of the power of the Mac’s Finder to iOS. Most notably, if you have Apple’s Lightning to USB3 Adapter, Files offers support for USB flash drives, SD cards, and hard drives. Plus, Files can also now connect to SMB-based file servers on your local network.

You can create folders on the iOS device’s local drive and store files there, viewing them in grid, list, and column views and sorting by name, date, size, kind, and tags. Files also now lets you zip and unzip files. Oddly, Files also includes a document scanner that can create standalone files of scanned pages. 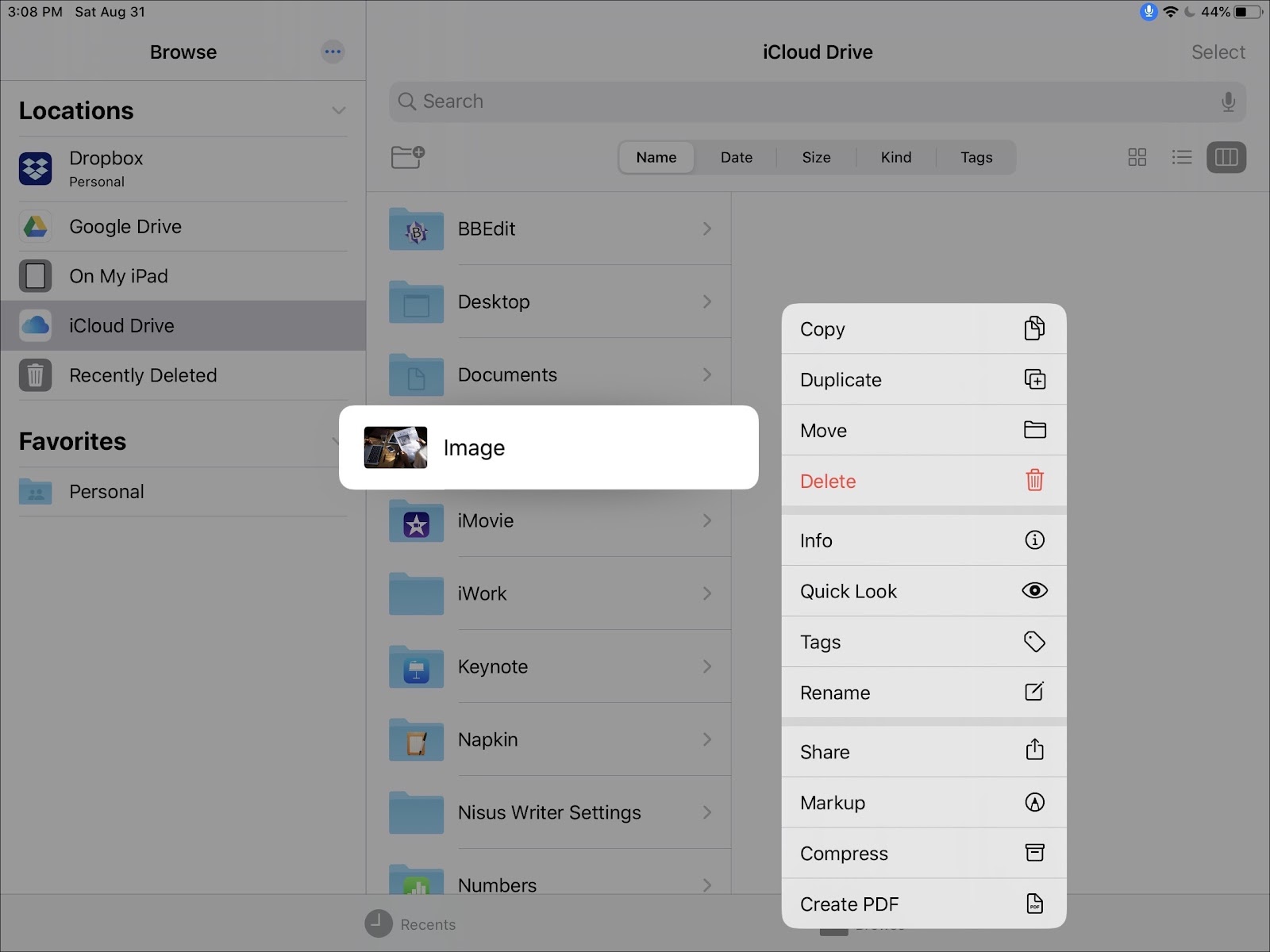 If you’re a fan of Dark mode in macOS 10.14 Mojave, you’ll be pleased to know that you can now switch to it in iOS too, or have it kick in only at night. Dark mode might even save some battery power on iPhones with OLED-based screens like the iPhone X, XS, and XS Max. 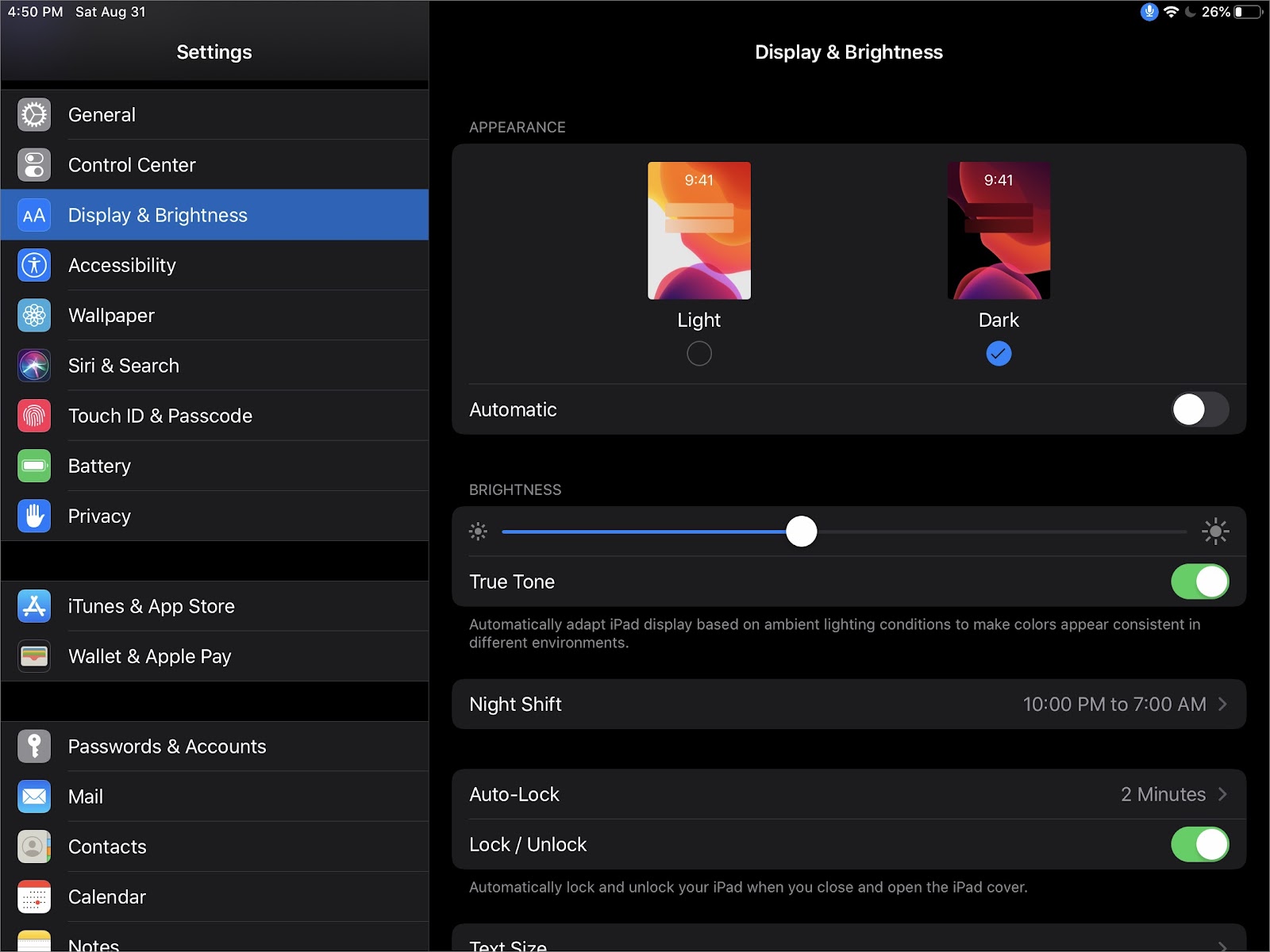 Apple added numerous features to Photos, refactoring its interface to match the update in Catalina. It now provides an AI-curated selection of photos displayed by Years, Months, and Days—complete with event titles—plus an All Photos grid that shows everything. Live Photos and videos play automatically (without sound) as you scroll. 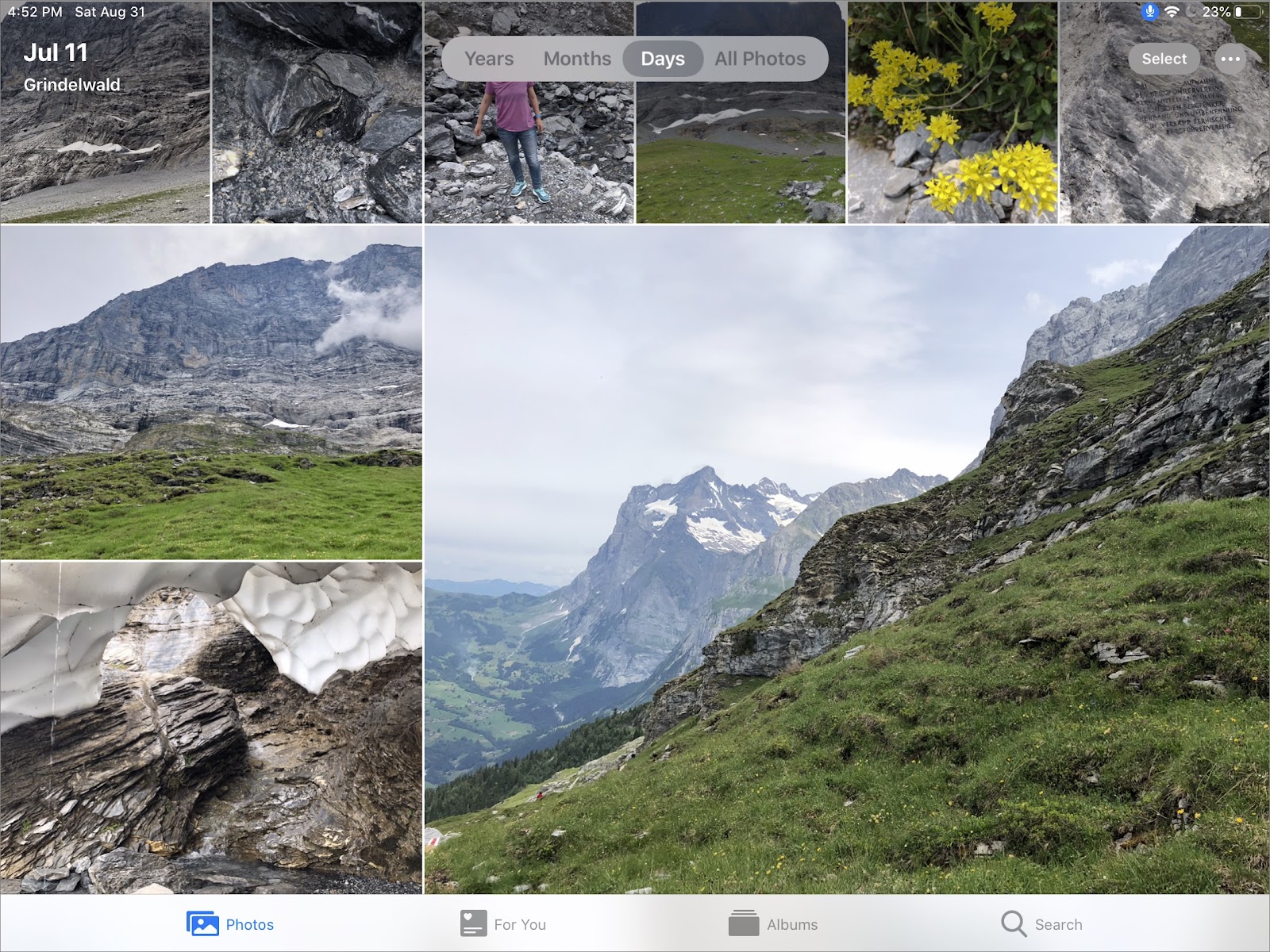 Editing has improved significantly, with Photos now offering tools to boost muted colors, sharpen edges, reduce noise, adjust color temperature, increase image clarity, and add vignettes. You can control the intensity of any filter, or of the automatic Enhance adjustments. Plus, nearly all the editing you can apply to a photo, you can use to edit a video, and video edits are now non-destructive.

Apple beefed up the Camera app for recent iPhones, so you can adjust the position and intensity of the studio lighting in Portrait Lighting, and it also gains a new High-Key Mono effect.

On the iPhone, the Health app at long last gains features related to cycle tracking and fertility. Using data entered or imported from a third-party app, Health can now predict the start and end of a woman’s next three cycles and provide a notification when her period is approaching. Similarly, it can predict fertility windows and pop up an alert when one is approaching. Cycle Tracking, a companion Apple Watch app, will make it easier to log menstruation and symptoms.

iOS 13’s Health app also now tracks headphone audio levels and alerts you if they reach dangerous levels. Another new Apple Watch app—Noise—listens to the ambient sound levels around you and warns you if they’re getting too loud.

Those may be the big changes, but we can’t resist sharing some more subtle ones too:

Most features of iOS 13 apply to the iPad as well, apart from those that are iPhone-specific, like the Health app. But iPadOS 13 is a superset of iOS 13, so it adds features to the iPad. 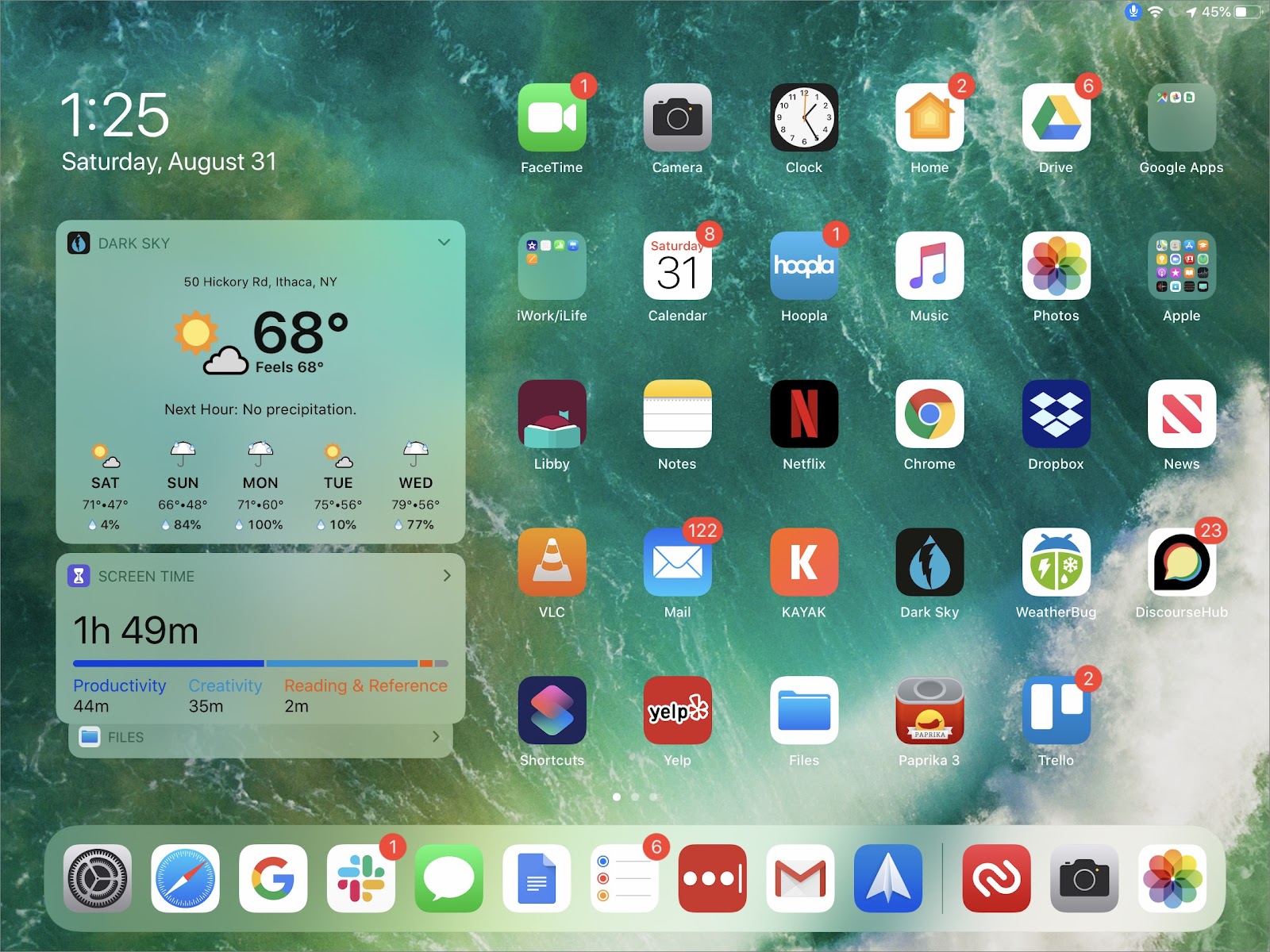 Apple improved the iPad’s multitasking capabilities in iPadOS 13 too. You can have multiple apps in Slide Over—just swipe up to see all of them or swipe along the bottom to switch between them. The big win in Split View in iPadOS 13 is the capability to have multiple windows from the same app open simultaneously, and it’s also now possible to have a window from the same app open in multiple spaces. The updated App Switcher now shows all spaces (Split View combinations) too.

Safari has grown up in iPadOS 13, becoming a desktop-class browser. That means it works better with complex Web apps like Google Docs, Squarespace, and WordPress. It also offers per-site settings, the option to save a set of tabs as bookmarks, a download manager, weak password warnings, and 30 new keyboard shortcuts.

iPadOS 13 works with the new Sidecar feature in Catalina to let you use an iPad as a Mac’s second screen or graphics tablet (with an Apple Pencil). You can use it either to extend your Desktop or to mirror a Mac’s screen, and it works either wired or wireless.

Speaking of the Apple Pencil, Apple has made it more responsive, redesigned the tool palette, and provided a pixel eraser tool. You can also now use an Apple Pencil to take screenshots, and even capture and mark up an entire document, email, or Web page.

Phew! There’s a lot to like in iOS 13 and iPadOS 13, but there’s also a lot to learn, so make sure you find some time to incorporate the new features into your usage.

The feature Apple is promoting most heavily with macOS 10.14 Mojave is Dark mode, which the company advertises as “a dramatic new look that helps you focus on your work… as toolbars and menus recede into the background.” Let’s look at what Apple has done with Dark mode, after which you’ll have a better idea of what to think about while trying it.

First, to turn Dark mode on, go to System Preferences > General and click the Dark thumbnail to the right of Appearance. Mojave immediately switches to Dark mode, turning light backgrounds dark and swapping the text color from dark to light.

While you’re in System Preferences, click over to the Desktop & Screen Saver preference pane. If you scroll down in the Desktop Pictures list, you’ll discover a bunch of new wallpapers that blend well with Dark mode.

You’ll notice that the color change takes place instantly not just in the Finder, but also in any apps that support Dark mode. Most of Apple’s apps support Dark mode and third-party developers are rapidly adding support to their apps as well. However, Dark mode requires explicit support from apps, so older apps that aren’t being updated will maintain their standard dark-on-light color schemes.

Some apps, such as Maps and Mail, give you additional options that change just how dark they get. In Maps, choose View > Use Dark Map to toggle between a dark map style and the familiar map style that mimics a paper map. Similarly, in Mail, go to Mail > Preferences > Viewing and deselect “Use dark backgrounds for messages” to return to a white background.

If you generally like Dark mode but have trouble reading light text on a dark background due to the reduced contrast, you may be able to choose a different font or style in the app’s preferences that makes the text more readable. Apps like Mail give you a fair amount of that sort of control.

For even more control over contrast, open System Preferences > Accessibility > Display. There you’ll find a Display Contrast slider that lets you make text lighter and backgrounds darker. You can also select Reduce Transparency to make it so items like the Dock and menu bar are solid colors, rather than allowing the background to bleed through. To separate dark and light further, select Increase Contrast, which increases the brightness of divider lines as well.

The Dark Side of Dark Mode

Contrast is necessary for pulling out fine details, but too much contrast can be uncomfortable or even painful—think about how you feel when someone turns on a bright light in a previously dark room. For visual comfort, it’s usually best to match your screen with the lighting of your surroundings. That’s why people who often work at night or with the window blinds down like dark modes—a bright screen seems brighter in a dimly lit room. That’s the theory behind the traditional dark text on a light background too, since the room will be quite light during the day.

So Dark mode can run into two problems. First is that using it during the day or in a brightly lit room may create an uncomfortable contrast between the screen and its surroundings. Controlling your room lighting can eliminate this as an issue. Second and more troubling, even apps that support Dark mode may have large content areas that are bright white, creating a strong contrast between the content area and the rest of the app. Many Web sites in Safari have this effect, as do documents in apps like Pages and Numbers. There’s no way around this scenario.

Even if Dark mode isn’t perfect, it’s worth a try if you have trouble looking at bright screens. Regardless, if it goes too far for you, one of the new dark wallpapers may be easier on your eyes. While most people aren’t overly light sensitive, a non-trivial percentage of the population is, particularly those who suffer from migraines or who have endured concussions, and those with a variety of ocular conditions. And if you’re on the other end of the spectrum—if Dark mode looks dirty and is hard to read, just stick with the traditional Light mode.