Need to Restart a Mac That Has Frozen? Here’s How 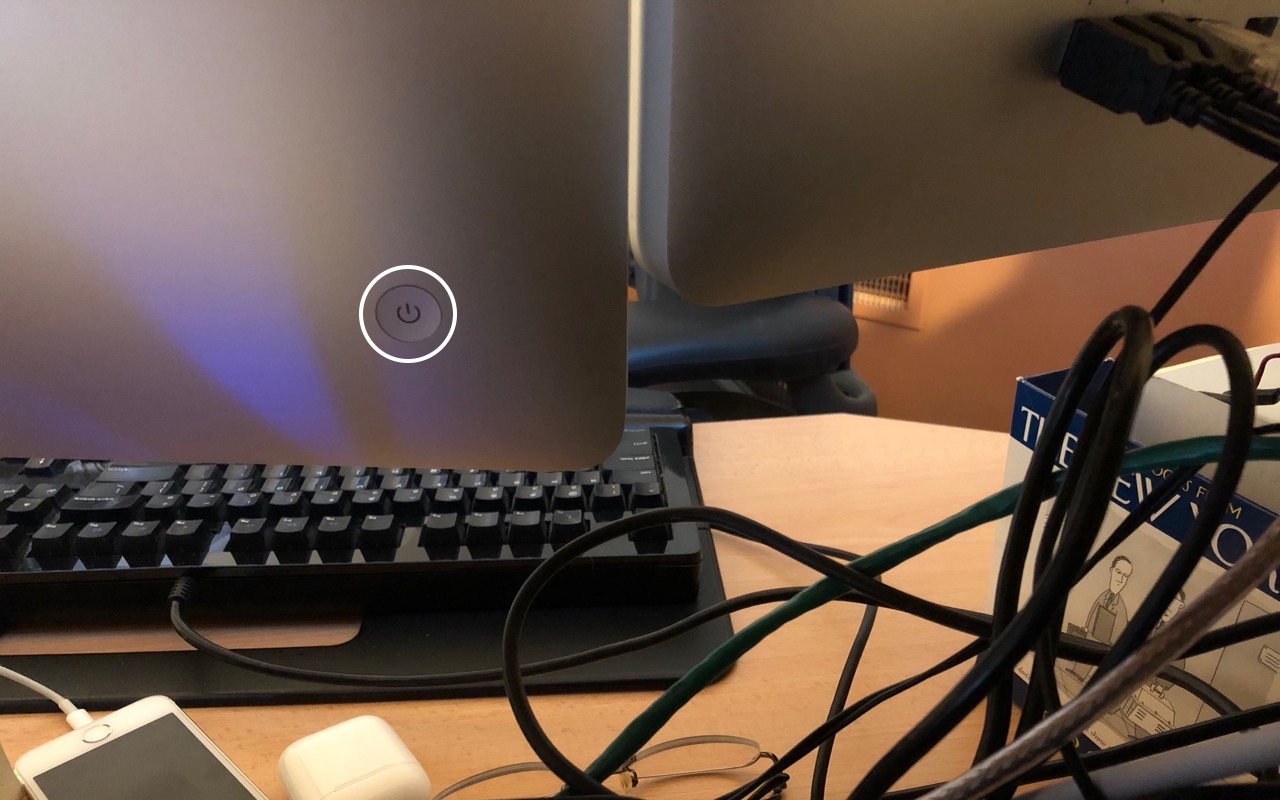 It’s extremely uncommon for a Mac to freeze or crash these days, but it can happen. What should you do if your Mac locks up and becomes completely unresponsive to the mouse and keyboard? The trick is to press and hold the power button until the Mac turns off. Wait 5 or 10 seconds, and press it again to turn the Mac back on. You will lose any unsaved changes if you do this, so use it only as a last resort when you can’t restart normally. Look for the power button on the back of a desktop Mac, and at the top right of the keyboard on most laptop Macs. For a recent MacBook Air or a MacBook Pro with a Touch Bar, press and hold the Touch ID button.

iOS 12 Lets You Add a Second Person to Face ID

Touch ID lets users register up to five fingers that can unlock an iPhone, which has long been a boon for those who share access to their iPhone with trusted family members. However, users of the iPhone X haven’t been able to give a second person Face ID-based access, forcing those people to wait for Face ID to fail and then tap in a passcode manually. iOS 12 lifts that limitation, allowing a second person to register their face with Face ID on the iPhone X and the new iPhone XR, XS, and XS Max. To set this up, go to Settings > Face ID & Passcode. Enter your passcode and tap Set Up an Alternate Appearance. Then give your iPhone to the person who should have access and have them follow the simple setup directions.

Being an Apple User Means You’re Not the Product

There’s an Internet saying: “If you’re not the customer, you’re the product.” The point is that, if you’re getting a service for free, the company providing it sees you not as a customer, but as a product to sell, generally to advertisers.

This is how Google, Facebook, and Twitter operate. They provide services for free, collect data about you, and make money by showing you ads. In theory, the more that advertisers know about you, the better they can target ads to you, and the more likely you’ll be to buy. Personalized advertising can seem creepy (or clueless, when it fails), but it isn’t inherently evil, and we’re not suggesting that you stop using ad-supported services.

This ad-driven approach stands in stark contrast to how Apple does business. Apple makes most of its money by selling hardware—iPhones, Macs, and iPads, primarily. Another big chunk of Apple’s revenue comes from App Store and iTunes Store sales, iCloud subscriptions, and Apple Pay fees. Knowing more about you, what Web pages you visit, what you buy, and who you’re friends with doesn’t help Apple’s business, and on its Privacy page, Apple says bluntly, “We believe privacy is a fundamental human right.”

Of course, once your data is out there, it can be lost or stolen—in June 2018, a security researcher discovered that the online data broker Exactis was exposing a database containing 340 million records of data on hundreds of millions of American adults. Ouch!

Let’s look at a few of the ways that Apple protects your privacy.

The longer you use Siri and Dictation, the better they work, thanks to your devices transmitting data back to Apple for analysis. However, Apple creates a random identifier for your data rather than associating the information with your Apple ID, and if you reset Siri by turning it off and back on, you’ll get a new random identifier. Whenever possible, Apple keeps Siri functionality on your device, so if you search for a photo by location or get suggestions after a search, those results come from local data only.

When you register your fingerprints with Touch ID or train Face ID to recognize your face, it’s reasonable to worry about that information being stored where attackers—or some government agency—could access it and use it for nefarious purposes. Apple was concerned about that too, so these systems don’t store images of your fingerprints or face, but instead mathematical signatures based on them. Those signatures are kept only locally, in the Secure Enclave security coprocessor that’s part of the CPU of the iPhone and iPad—and on Touch ID-equipped laptops—in such a way that the images can’t be reverse engineered from the signatures.

And, of course, a major goal of Touch ID and Face ID is to prevent someone from violating your privacy by accessing your device directly.

People with medical conditions can be concerned about health information impacting health insurance bills or a potential employer’s hiring decision. To assuage that worry, Apple lets you choose what information ends up in Health app, and once it’s there, encrypts it whenever your iPhone is locked. Plus, any Health data that’s backed up to iCloud is encrypted both in transit and when it’s stored on Apple’s servers.

A linchpin in Apple’s approach to privacy is its control over the App Store. Since developers must submit apps to Apple for approval, Apple can enforce stringent guidelines that specify how apps can ask for access to your data (location, photos, contacts, etc.). This isn’t a blanket protection—for instance, if you allow a social media app Facebook to access your contacts and location, the company behind that app will get lots of data on your whereabouts and can even cross-reference that with the locations of everyone in your contact list who also uses the service.

In the end, only you can decide how much information you want to share with the likes of Google, Facebook, and Twitter, and only you can determine if or when their use of your details feels like an invasion of privacy. But by using Apple products and services, you can be certain that the company that could know more about you than any other is actively trying to protect your privacy.

With the release of the new 13-inch and 15-inch MacBook Pros, Apple has rewarded those who have been waiting patiently for new models. They’re smaller, lighter, and faster than the previous MacBook Pros, but what really sets them apart is the new Touch Bar. What’s a Touch Bar, you ask?

It’s a thin, touch-sensitive screen above the keyboard, where the function keys used to be. The Touch Bar displays buttons, sliders, and other tools that change not only with what app you’re using, but also based on what you’re doing in that app. If you’re accustomed to using the function keys, you’ll be relieved to know that pressing the physical Fn key on the keyboard displays F1 through F12 on the Touch Bar. Most of the time, though, you’ll want to let apps customize the Touch Bar for you.

In Photos, for instance, the Touch Bar lets you scrub through your photo collection, mark photos you love, and edit photos. Once you select a photo for editing, the Touch Bar changes to provide editing tools, such as exposure and color sliders and rotation controls. In a video editing app like Final Cut Pro X, the Touch Bar can provide a timeline scrubber along with trimming tools. Plus, you’ll be able to customize the Touch Bar however you like in different apps.

Integrated into the right edge of the Touch Bar is a Touch ID sensor, just like on an iPhone or iPad. Touch it with one finger to log in to the MacBook Pro, or with another to switch to a second account via fast user switching. Other people can use it to log in to their accounts too. The Touch ID sensor also communicates with a new Apple T1 chip in the MacBook Pro to store Apple Pay information for use in Safari when buying stuff on Web sites.

The new MacBook Pro models sport an industrial design that takes cues from the 12-inch MacBook to reduce size and weight. In fact, the new 13-inch MacBook Pro is now thinner, narrower, and less deep than the 13-inch MacBook Air and less than an ounce heavier at just over 3 pounds. The new 15-inch model weighs in at 4 pounds.

Those size and weight savings don’t come at the cost of reduced performance or battery life. Battery life is the same as the previous models at up to 10 hours, and performance is notably better, thanks to faster processors, improved graphics chips, and speedier solid-state storage. Speaking of storage, the new Macs generally start at 256 GB, with 512 GB or 1 TB SSD upgrades, and you can opt for 2 TB in the top-of-the-line 15-inch model. 8 GB of RAM is standard, but you can bump that to 16 GB.

You’ll notice that the Force Touch trackpad looks huge. That’s because it’s twice the size of the trackpad in the previous MacBook Pro models, making it easier to move around and use multi-touch gestures.

Both models feature improved screens. The resolutions remain the same as before—2560 by 1600 pixels for the 13-inch model and 2880 by 1800 for the 15-inch—but Apple says the displays are 67 percent brighter, have a 67 percent higher contrast ratio, and show 25 percent more colors, a boon to graphics professionals.

For charging and expansion, Apple learned a lesson from the 12-inch MacBook, which has only a single USB-C port. These new machines feature four Thunderbolt 3 ports, two on each side, and you can use any port for charging, driving an external display (via an adapter for HDMI or VGA), or connecting to storage or other devices. Thunderbolt 3 uses the same physical connector as USB-C and supports older USB devices too. It boasts so much bandwidth—40 Gbps—that it can even drive two additional 5K displays or four 4K displays simultaneously!

Prices start at $1799 for the 13-inch model and $2399 for the 15-inch model, and you have a choice of silver or space gray colors. For those who are looking to save some money, Apple also introduced a cheaper version of the new 13-inch MacBook Pro that lacks the Touch Bar, has only two Thunderbolt ports, and uses a slower processor. The previous MacBook Pro models remain available, as do the 13-inch MacBook Air and 12-inch MacBook, so if you’re having trouble figuring out which of Apple’s laptops makes the most sense for your needs and budget, come talk to us!